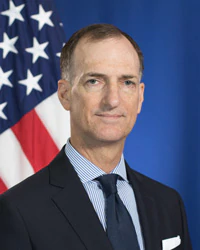 Thomas Smitham is the Chargé d’Affaires, a.i, at the U.S. Embassy to Italy. He arrived in Rome in June 2019. He has served abroad and in Washington in senior positions since joining the U.S. diplomatic service. He was Charge d’Affaires at the U.S. Embassy in Trinidad and Tobago and Political Minister Counselor at the U.S. Embassy in Mexico City. Tom has also worked in U.S. Embassies to Peru, Belgium (U.S. Mission to the European Union), the UK, and the Holy See. In Washington, he focused on economic policy in the U.S. Department of State, including as chief of staff to the Under Secretary for Economic Growth, Energy, and the Environment.

He received a master’s degree in international affairs from the Fletcher School of Law and Diplomacy at Tufts University and a B.A. in history from the University of California, Berkeley.