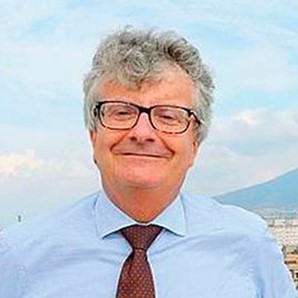 Giorgio Ventre is the Director of the Department of Electrical Engineering and Information Technology at Federico II in Naples (Italy) and scientific Director of the IOS Developer Academy. He is a senior member of ACM, IEEE, as well as IFIP. He has collaborated and still collaborates with several ministries and government agencies and with the Regional Council of Campania for initiatives related to research and innovation, as well as technology transfer. He sits on numerous scientific committees and is a member of the Board of Directors of the Fondazione Ugo Bordoni and the Museo Nazionale di Capodimonte.

By appointment of the Minister for Education, University and Research since November 2017 he is a member of the National Scientific Committee for the Implementation of National Indications and the continuous improvement of Teaching. From 2014 to 2017 he conceived and coordinated for MIUR and the CINI Consortium the Programma il Futuro initiative for the teaching of coding in Italian schools, which led Italy to be the first country in the world for number of events during the International Hour of Code 2016 with over 2,000,000 students participating. From 2003 to 2011 he was President of the Consorzio Campano di Ricerca per l’Informatica e l’Automazione Industriale (CRIAI), one of the few examples of public-private collaboration in the South of Italy in industrial research. In collaboration with Selex – SI (Finmeccanica Group) and with Esaote he has also established two public-private research laboratories in the fields of Software for Mission Critical Applications (COSMIC) and Imaging Diagnostic Applications (ESALAB). In 2000 he contributed to found ITEM, the National Research Laboratory on Multimedia Informatics and Telematics of the National Interuniversity Consortium for Informatics (CINI) and was its Director from 2000 to 2004 and from 2013 to 2015.

From 1991 to 1993, he was a Postdoctoral Fellow with the Tenet Group at the International Computer Science Institute and the University of California, Berkeley. He has a BSc in Electrical Engineering and a PhD in Computer Engineering, both obtained at the University of Naples Federico II.